"Do you fools know I have looked like this since the village was founded? Have you any idea how your ancestors suffered and sweated to build this mountain village after they were chased out of their homes for carnal relations with demons? On that day---the first day of our 10,000-year history, all their hard work was poised for destruction. I'll tell you a law that you youngsters don't know about. When that person or any of his bloodline should ever appear, then and only then must all in the village bend any subsequent laws and comply with his wishes. Heed my words!"
―Barbarois ElderDemon Deathchase|[src]]]

"Barbarois Elder"(バルバロイ長老)is the otherwise unnamed leader of the village of the Barbarois. He has served as their leader since the village's founding 10,000 years ago. He makes his appearance in Demon Deathchase.

Described as a hoary-maned old man, he strokes his white beard as he speaks that sweeps the ground as he does so. His face and the rest of his body are covered in wrinkles. Smiling broadly the wrinkles on his face twist and turn up into what resembles a smile. When angry he caries a wrathful mien that is a sight to be hold, ready to take a swing at the perpetrator with his long cane. Throwing his head back in a way to almost straighten his spine he gives a hearty laugh when inclined to do so.

As leader of the village he carries a strong command presence, that only the few that come to guard the carriage for Mayerling can come to rival due to their power of being the cream of the crop and their intimidating violent natures. But they are well integrated it seems into the Barbarois and heed to the Elder's rules as do all the Barbarois because they know once broken they are out of the group altogether. The elder seems to broke very little threat to the respect of his station. Other wise he is a very jovial, wise, and respectful man of his own. He is very capable and seems to be very skilled in all things that have to do with running the village as he seems extremely well situated in his leadership role wearing it like a second skin as one would expect with thousands of years of experience.

As leader of the village for 10,000 years from its founding, the village was the scene of a malady that began to spread through out. The village was set on a ground that slowly began to become poisonous destroying all their crops as they slowly withered  more and more every year. This area before they knew it became toxic and threatened to destroy the village having no food or other place to go. Then it was the Sacred Ancestor who appeared to the elder asking that he needed help in achieving a grand purpose, and that their village would be spared in exchange. Before he could finish speaking five of the strongest came to his side and left with him. As he walked away the gas began to die down and become docile, the fruits, animals, and crops all began to take life. The village then rose into the sky and has only prospered ever since. The elder and the other villagers decreed that this debt to the Great One can never be repaid. And they are indebted to him and his race for all time.

When D arrives at the village the Elder is there to greet him. Impressed by his manners, countenance, and strength the elder takes to a strong respect for the man as he carries the same grand

purpose of the one that saved the village and who they most hold high despite D's protests that they have the wrong man. D asks them to allow the carriage to now leave the village and no harm will be done to them and he will continue his pursuit in peace. The elder at first was hesitant to accept this even bargains with D about the price, but as he continues to talk to him he can not deny the truth of D's heritage and the relations to that Legendary Dark Lord. Despite resighting the highest form of law which says if a certain man of his heritage were ever to appear that any other deals or laws are circumvented and they are to do as he says no question, the Barabois guards of Mayer deny his ruling and intend to not break the contract with which they are called upon to hold up to as originally agreed. As D will not admit to this station. They then call on the others to attack D that feel the same as they do. As they attack D each one is cut down till none are left. The rest stop due to fear. As they do the Marcus Clan who have taken advantage of this attention drawn to D have got past their defenses and have been observing. They send Grove in to destroy as many of them as possible. On his way in he hears Caroline's proclamation that the carriage is headed to the States. The Barbaois guards then flee with the carriage the back way. As they do Grove attacks D who dodges the attack flying high into the air coming down and cutting Grove. His form returns to his body afterward seemingly having nothing to do with D's attack but rather because of his body calling it back involuntarily. The Elder then calls for the rest to stop their attack and they abide by it. D asks the elder where they are headed, he tells D of the Claybourne States where they intend to take flight. D thanks the Elder and leaves. The Marcus Clan how ever over hear the conversation before and are provided with vital intell they sought.

As a Barbarois who are the descendants of various races who had carnal relations with true Demons they have powers and abilities that are superhuman. The elder is blessed with immortality it seems having looked the same for over 10,320 years.

The elder is portraid the same personality and character wise, although he is a bit more given to strange behavior in the movie such as riding around on a unicycle. His heritage is the same as the Barbarois are mutants who are the products of various races of beings having carnal relations with demons and were driven out of their home where they decided to build a village of their own in the mountains. The difference comes in that the guards are more vicious toward the elder and given to disobey which causes the rest of the villagers to attack D. The elder in the book comes to call D "mil lord" and is quick to come under his service if he desires. His appearance is greatly differed where by the elder has a long beard and garbed in normal attire the elder in the movie  has no beard and is garbed it what appears to be circus like or jester attire while riding a unicycle.

The elder greets D in the Barbarois square. D dismounts in respect to the elder. The elder makes note of it showering him with compliments from his manners to his looks to his power, and to his intelligence. He continues on to say he has made the best impression anyone could make here. D cuts to his business not responding to or furthering any other subject matter saying he regrets to have to kill so many here and wishes to avoid the blood shed of such a noble race. He asks that he give up the carriage. Bengé mocks the conversation with the elder responding to put him in place but the conversation is interrupted when Grove's spiritual form takes the field and assaults the Barbarois. The elder commands to get the carriage out now. He then comments later he regrets to miss the coming battle but D is no match for the guards.

"You know I don't have anything against the Barbarois personally, its a shame I will have to kill so many of you. Indeed I admire and respect your devotion to duty. Yet I have to wonder about the fairness when you allow one to fight against so many....but if that will entertain you..."
―DVampire Hunter D: Bloodlust|[src]]]

"Old maaaaan! I think the fellow is right! Please allow the three of us to entertain our young guest here...unless... he thinks that's unfair! Three against one how unfair...three against one UNfair!"
―BengeVampire Hunter D: Bloodlust|[src]]]

"Stop! That's enough, you mock us with your ridiculous antics Bengé! I won't have you distracting us from the job at hand, which is the protection of the Carriage. We will do things MY way."
―Barbarois ElderVampire Hunter D: Bloodlust|[src]]] 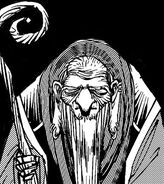 Add a photo to this gallery
Retrieved from "https://vampirehunterd.fandom.com/wiki/Barbarois_Elder?oldid=25356"
Community content is available under CC-BY-SA unless otherwise noted.