Demon Deathchase is the third novel in the Vampire Hunter series.

With his dying breath, an old man begs that his daughter and the Noble who made off with her be pursued and, if necessary, slain. Their destination is a spaceport in the Claybourne States and their ultimate goal—a world where their love might be safe. The vampire Mayerling is perhaps the only one humans ever spoke well of, and the girl, who remains strangely nameless throughout the book, goes with him of her own free will.

Still, the old man puts a hefty price on their heads, and that sort of blood in the water draws Hunters—the notorious Marcus clan and D. The four Marcus brothers Borgoff, Nolt, Groveck, and Kyle, along with their sister Leila, are as famous for their Vampire Hunting as they are for their predilection toward killing off the competition, and they hide a dark secret about their sister as well.

As if all this warfare wasn't lively enough, Mayerling pulls through the hamlet of Barbaroi and enlists a trio of powerful bodyguards from the local population—all of which are human/monster half-breeds. 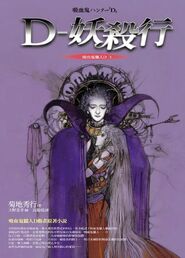 Retrieved from "https://vampirehunterd.fandom.com/wiki/Demon_Deathchase?oldid=24844"
Community content is available under CC-BY-SA unless otherwise noted.