"After the final Great War... for reasons unknown, the Nobility-Vampires, who once reigned over humanity, now face a decline in their species and are sinking into their twilight. And yet, some of them gave rise to mutant monsters and advanced technology in order to instill fear into the hearts of people living in the Frontier. This brought on the insurrection of professional hunters who challenged the Nobility. Among them, Dhampirs- mixed-blood children of nobles and humans-became ideal Vampire Hunters."
―Narrator[src]Dhampir (also mistakenly called "Dunpeal") is a half-breed hybrid of a Noble and a Human. Not to be confused with dunpeals, danpeals, or dampiels.

Though many become Vampire Hunters, some succumb to their vampire urges and attack the very people who hired them. Human beings detest them, and dhampirs often hate their own kind, as well. While it varies from individual to individual, they usually inherit half of the abilities of their vampire parent – half their strength, speed, sight, hearing, and so on. Some of the faster-healing dharmpirs can break every bone in their body and rupture some internal organs, yet heal completely in about 72 hours. They can see in the dark. Some Dhampirs age like humans, judging from Granny Viper's appearance. Those lacking sufficient willpower drink human blood. However, in most cases their victims don't become puppets like those of vampires do. Caroline's ability to enslave plants and inanimate objects may reflect her Barbarois background as much as her vampire parentage. In general, their vampire biology dominates. Their biorhythms peak at midnight and bottom out at noon. Less than one Dhampir in ten can with stand an attack during the day. Rain or shine, their bodies crave rest during the daylight hours. Even in a shady place, they can't remain conscious more than eight hours during the day. Four hours of walking around in the sunlight can put them into a coma. A super-grade-A Vampire Hunter can barely manage five to six hours of activity during the day. And, in case you didn't notice, absolutely none of that seems to have any bearing on D. He is, however vulnerable to one dhampir weakness: sunlight syndrome. In most dhampirs this manifests itself every six months as a sudden feeling of exhaustion, which forces the sufferer to retire from action for several days. D apparently can go five years between such attacks, but he must recover by resting buried under soil. Like Nobles however, this affliction will only affect him while he is on planet Earth – he isn't effected by sunlight while on other planets or inside other dimensions.

Ten months and ten days.- is the amount of time a baby spends in the womb, according to traditional Japanese thinking. In the case of the baby of the owner of the Red Eyes(and Dhampirs in general), the child should be born about six months after Tae noticed the first indications.

A human-vampire half breed. Although they're normally like ordinary humans, they can use the unholy might of a vampire when enraged.

While it varies from individual to individual, they usually inherit half of the abilities of their vampire parent---half their strength, speed, sight, hearing, and so on.

Cold Immunity- Dhampirs in general are immune to the adverse affects of cold weather not needing protection to survive even extreme temperatures as mentioned in White Devil Mountain.

Capsules – D takes them in lieu of food. They contain dried blood plasma and nutrients. Dropping them into a cup of clear water produces blood that can be drunk. Apparently this is a common source of sustenance for dhampirs. An Ordinary dhampir would take one at each meal three times a day.

Dhampirs with less self-control fed on human blood from time to time, but there had never been a case where the person they fed on became the same sort of marionette Nobles made of their victims. Being only half-vampire, dhampirs' powers didn't extend that far. [1]D has proven to be one of the many exceptions of this having enslaved the Midwich Medusas to his will, making them into a sort of Victim, Cesare or posssiblly others. His bite's influence even surpassed that of Duke Gilzen, a pure blood uncommonly powerful Greater Noble. Dhampirs with the Sacred Ancestor's Direct Bloodline may also have similar abilities. 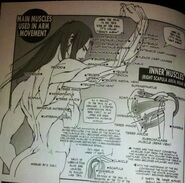