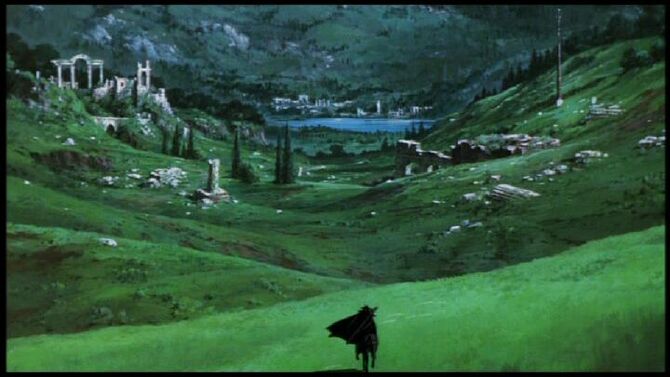 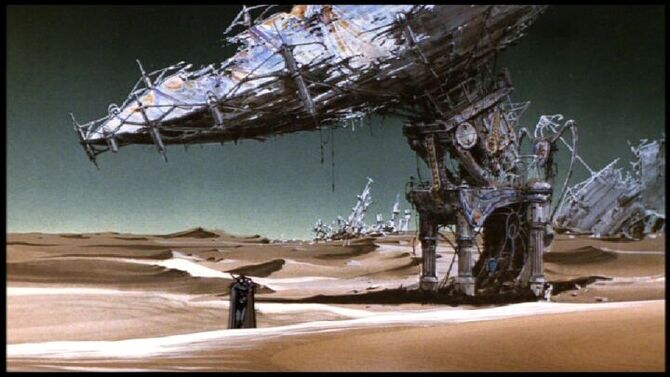 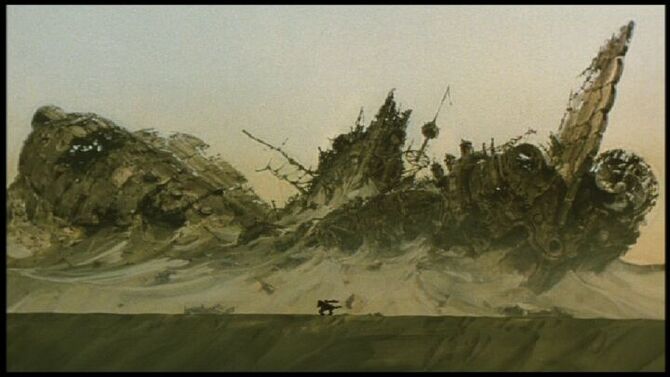 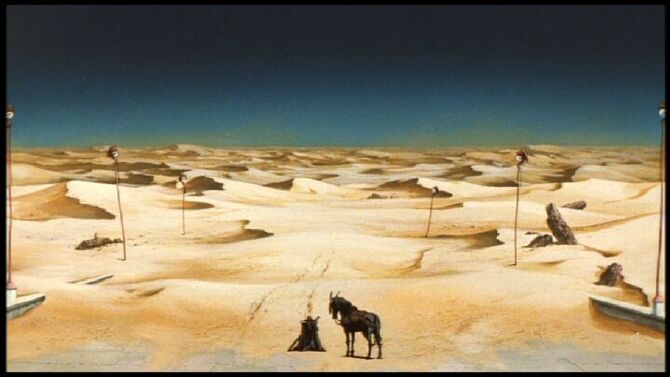 The Frontier is a post-apocalyptic wasteland inhabited by humans, mutants, demons and various other strange creatures. It includes small farming communities such as Ransylva, Weapons and warrior training communities like Razin, fishing communities like Florence and many Nobility and war remnants such as the Accursed Repository and the Talos Arsenal. The Frontier has many descriptions some conflicting about the scope of the world. What is not conflicting is that it is mainly broken up into 4 main regions. The Northern, Southern, Eastern and Western Frontiers. With in each Frontier are many communities like towns, villages, cities, and the outskirts of those areas.

D's Travels and Conflicts of Makeup[]

While Hideyuki Kikuchi has mentioned that the frontier that D travels is most likely current day Eurasia this may have been mainly in response to the project that was going to deal with the American Wasteland. It is mentioned many times that the Capital is at the center of many routes that run through out the world to all Seven Continents. It is highly unlikely D, who travels constantly over thousands of years, had not seen the world completely over many many times already. It is also mentioned in Tyrant's Stars that during the war with the OSB many of the continents were completely annihilated. Some creatures that have been given the form of a continent roam the world and are able to move in some statements and may have also taken part in actual continents being destroyed as well. They may have since been restored but the world is readily accessed by travelers and a system of travel is well established and in place for anyone to reach by technological means. The travel by people is restricted by the Revolutionary Government but there are still many who will slip away or who by trade such as Hunters, Traveling Merchants, and those that work for the Capital that do travel legally and frequently.

Personal Travel on the Frontier[]

Aside from the Nobility’s teleporters and Mach cars, the predominant means of transportation on the Frontier was cyborg horses. There were more than a few cars powered by steam, gasoline, or other fuels, but in terms of range, performance, and dependability, they couldn't compare to cyborg horses.

The Frontier at night[]

All told, the Nobility had dispersed 1,243,0778 monsters species throughout the world. This makes travel and daily life very dangerous for humans especially since most of them feed off of and are bred to be hostile to them. But while the day to day is dangerous it is the night time that these creatures rule making it suicide for most to even attempt going with out shelter at this time. It is never silent during these times as what was once enjoyed. Voices beyond numbering sang from the tops of the demon's scruff oaks or from the dense greenery of a thicket of sweet mario bushes. The Forrest at night was home to hunger and evil. Spraying poison to seal their opponents' eyes, dungeon beetles were known to set upon their prey. A swarm of them could take out other dangerous creatures or humans in less than two minutes, stripping them to the bone, gorging on the meat while the prey was still alive with teeth no bigger than grains of sand. Some times black earth swelled up, and a mass of absorption worms burst out, crawling in all directions. Over a foot and a half long, the massive worms broke down the soil with powerful molecular vibrations and absorbed it through the millions of mouths that graced the nucleus of each of their cells. Usually they latched on to a traveler's ankle first and melt the right foot off before pouncing on more vital locations like the head or heart.

While everyone who went out on the Frontier might not know it, those who actually lived there realized the forests weren't a wise place to sleep, the plaintive bird songs echoing on the wind were actually the voice of a demon bird that muddled the senses, and that the gentle fog was in fact a mist devil trying to sneak into their victims body. The song of an orchestra of sounds shot out from the coming and going of tiny insects powerful enough to devour fences and posts which were immediately followed by the scent of the petal of a flower that also killed the fiends off even in the wastelands of the desert. Even in towns and cities fortified it wasn't uncommon for whole areas to completely vanish with out a trace. While people became complacent and used to these happenings all knew if they were wise, to avoid the night completely and find the best shelter available to them.

To save wear on their generators, it's commonplace to use lamps fueled with animal fat for lighting at night on the Frontier.

The Noble Greylancer and Nobility Rule[]

The Nobility took over rule from the Humans after the nuclear war which laid waste to the land and crippled their society. The Nobility took advantage of this and established their own system of government adapting many of the structures of human ruled society and enhanced them many times over in a fairly well balanced democratic ruled society. This society was structured around the Central Government which rules the world along side the Overlords of each Frontier Sector. By the year 7000AD, the overlords of these sectors are the most renown and successful in history.