A term used to refer to the thousand Nobles under whom all the others act. To paraphraseDr. Ferringo: All the

true Nobility in the world are united under the thousand "Greater Nobility," the seven "kings," and the legendary dark lord who rules them all-- the great vampire, the king of kings. As in our own world, many of them seem to carry higher ranks, such as duke or grand duke. They are physically and mentally tougher than the average Noble. Some can operate with lowered biorhythms during the day as long as sunlight doesn't shine directly onto them, like Baron Byron Balazs. Since several of the "invitees" summoned by General Gaskell are Greater Nobles. and the general is mentioned as being a Noble second only to the Sacred Ancestor, there is speculation as to whether he might qualify as one of the Kings. Of course, given how much cooperation he gets from said Nobles, that's far from certain.

The powers and abilities of Greater Nobles differ and usually depend on the individual what kind powers may manifest. The Physical prowess and level of power range from: 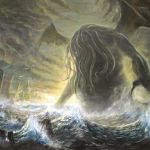