"Hey, mister! Wait! Mister, wait! Um, excuse me, sir, but I was wondering if you knew my grandmother Leila... Yes. It's you, isn't it? My grandmother told me about you. So, I'd be honoured if you could come to our house. My father would be so happy... Can you, please? "
―Leila's granddaughter[src]

Leila's granddaughter is a character from the movie Vampire Hunter D: Bloodlust. She is a descendant of the Marcus Clan through her grandmother Leila Marcus. She is seen at the funeral of her grandmother.

Her age was not disclosed, but she appears to be somewhere in her preteens. It's safe to say that she resembles her grandmother Leila Marcus a lot, as she has blue eyes, pale skin and blond hair worn in two braids. She wears a white shirt with a dark blue bow tie, pink dress and vest and a hat of the same color.

Leila's granddaughter appears to be rather kind and polite, welcoming D and wanting to host him in her home. She has a close relationship with her grandmother, saying that she often told a lot of stories about D, and it would be an honor to her family to invite him to their house. She is a little bit disappointed by his refusal at her offer, but she thanks him for his visit to the funeral and wishes him a goodbye.

"Oh, come on, we don't live very far... Okay, I guess I see... Anyway, thank you for coming. Goodbye. Goodbye!"
―Leila's granddaughter to D when he turns down her invitation[src]In the final scene of the movie, D arrives at Leila's funeral, watching from a distance. Leila's granddaughter is seen with family and other people holding a funeral for their beloved Leila. She noticed D who was watching from a distance, and she greets him and invites him to stay with them for a while. D declines, saying that he simply came to "repay a favor to an old friend", who feared no one would mourn her death, admitting he was glad she was wrong.

He tells her that he is glad many people have attended her funeral and that there's no need for him to lay another flower on her grave, as there are enough already. Leila's granddaughter, thanks him for coming, and D replies by smiling gently at her before he rides away. 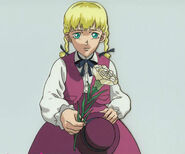 Add a photo to this gallery
Retrieved from "https://vampirehunterd.fandom.com/wiki/Leila%27s_granddaughter?oldid=25050"
Community content is available under CC-BY-SA unless otherwise noted.