"So I suggest we make a pact. Since we’re both in it for the long haul: whoever dies first, the other one can come and bring flowers to their grave."
―Leila Marcus[src]

Leila Marcus (レイラ・マーカス)  is a Vampire Hunter and a member of the Marcus Clan. Her first appearance is in the third novel of the series, Demon Deathchase.

"At twenty-two or -three years old, her visage was as lovely as a blossom, but there was something about how overly alluring it was that called to mind a carnivorous insect—beautiful but deadly."
―Narrator[src]

Leila is youngest of the Marcus clan, she's just over 20 years old, and has bright blue eyes and long, blond hair. She's outfitted in a crimson coverall, and equipped with a pair of sturdy goggles which she adjusts from her eyes to the top of her head. She has scars all over her body, where gashes were stitched up at some point. These scars may have been from living a rough life out on the frontier, or from the repeated forcefulness of her brothers.

She is the very definition of a tomboy in all incarnations of her. Having grown up with all brothers has rubbed off on her. She is highly capable and confident in her abilities. A soft romantic at heart with an iron clad exterior that protects this side to her at all costs. She is a thoughtful person and very honorable. While she forms bonds with people very easily due to her natural personality in all incarnations, in the novel this is overshadowed by the treatment she receives from her brothers.

In the novel, the trauma of having been raped by her brothers and insistence that they lay claim on her, while taking advantage of her even in times of injury with no regard to her emotions has scarred her, leaving her broken. She slowly gathers some of these pieces as she forms bonds outside the family; one being the guy in the butcher shop. However she isn't fully healed until she meets D. His treatment of her and kind words bring her back fully from the abyss of the broken spirit she was enduring. She is quick to proclaim this to him in all honesty when she tries to say her farewell to him.

She has a deep love for everything mechanical. She picks up the design and repair of most transportation without much effort. In battle she is fierce and determined despite what ever emotional state she is in, with a will and determination that even D is left in awe and quick to praise. She is also a lot softer and girlish than in the movie.

In Demon Deathchase, the novel equivalent of Bloodlust, Leila is introduced as the youngest and only girl in the Marcus clan. Blessed with a skill for making and handling machines, she is the proud maker and inventor of her Battle Car and all its equipments and weapons. She is well beyond all of her brothers in her expertise. She's a top rate vampire hunter living up to her family name, whereby she garners highest respect and praise from D on a number of occasions.

In Volume 3, the manga closely follows the events of novel Demon Deathchase, with minor changes such as Caroline's escape from Leila, and her meeting up with Kyle comes sooner. For the most part the events are the same. The character descriptions are closely followed as described in the Novel and the personalities of the characters.

In Vampire Hunter D: Bloodlust, Leila encountered D after the Marcus Family wiped out a village of what they called zombie vampires. Subsequent events lead to where she is badly wounded in an attempt to blow the carriage of Baron Meier Link away with her bazooka. D tends to her wound. When she regains her senses she abuses him with insults, with D retorting recalling her calling out for her mother leaving her astonished remembering what she had said along with that recant, having unwittingly revealed her most guarded secret memories to him.

In Vampire Hunter D (video game), many of the events from the Movie play out in the game but just revolve around the Castle. Such as her meeting D, being injured, D is taking care of her, etc. At one point you do get to play as Leila when D is "Killed" she comes across Left hand and the two of them together do some side missions in the game before tracking down D and reviving him.

Leila is a highly skilled Vampire Hunter who ranks among the best in her profession. She is a top notch hand to hand combatant and highly skilled in all forms of combat. Her Mother and Father were moderately skilled in genetic modification, which may have enhanced her some what physically. Her greatest talent is being innately skilled with mechanics and engineering specializing in anything to do with transportation. Cars, or even something with life of its own like a cyborg horse, it didn't matter, everything in that category she shines in developing, maintaining, and modifying. She also has a special talent that completely outclases her brothers in operating these modes of transportation. In the story she has another ability hidden that she didn't even know that is later on described in later novels as Half-Awake which allows her to not be controlled by Vampires when bitten whether she is in one of the various states or not.

First Aid Kit- Common on the Frontier, its use is invaluable for Warriors and Hunters who usually make use of it very often. She didn't keep up with her supplies which surprised D.

Cold Beer- Leila orders this in the town of Garucia when she goes into the bar.

Sliver Gun- The one wielded by Leila Marcus uses highly pressured oxygen to fire needles one-thousandth of a micron wide. The gun can leave the walls of a Noble's castle as friable as unglazed pottery. Leila uses this weapon against Benge in the ghost town of Barnabas.

Leila's Goggles- Leila Marcus has highly advanced goggles in both the movie and the Novel. They have auto zoom, can detect objects and beings from a long distance, image enhancing, and probably Multivision functions. 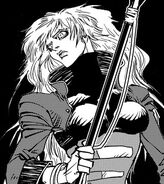 Leila's full desing in Kawajiri work book.
Add a photo to this gallery

Vampire Hunter D Wiki has a collection of images related to Leila Marcus.

Retrieved from "https://vampirehunterd.fandom.com/wiki/Leila_Marcus?oldid=25342"
Community content is available under CC-BY-SA unless otherwise noted.