Lord Rocambole was a crazed villain who out of theNobility's damned history, should never  be allowed to be revived. He is a murderer of the purest form.

Described as having a youthful face with disturbingly pale skin and having unsettling murderous eyes. He wears antiquated armor and viciously wears a pair of long swords. Beneath that he wears a white shirt, a scarf, and a pair of white riding breeches.

Rumor has it he is the crazed bastard son of the Sacred Ancestor. His character makes every noble regret having been born to the Nobility due to how much he is detested. He is the last to be summoned by General Gaskell as one of his assassins to stand against D. A quiet mad man, he claims he will need for life-forces of Noble power to destroy on D. He slays Baron Schuma, Grand Duke Mahmet, Major General Gillis, before he is challenged by D. To level the plain, D cuts off his left hand to do battle with him. Despite Rocambole's skill and special ability to mimic any one's power he is cut down by an attack unpredictable and unable to mimic by D dealing a cut he cannot heal from later splitting in two after an amazing battle.

"Living to be destroyed? Okay, so be it. If that’s the will of the Sacred Ancestor, any resistance is useless. But, useless or not, resistance is resistance. And the one who offers it, even if he’s no better than a bug, must make his will known. D, I may be destroyed, but I won’t let you leave here alive. Or the girl you came here to save."
―Lord Rocambole[src]

Besides having all the powers of a Noble, he has the power to add the life force of individuals to himself to gain more power. He  also can learn/add the special abilities of those he comes into contact with  to his already impressive arsenal.

"Oh, that dirty dog stole your trick — it looks like he can mimic anyone’s abilities in a split second"
―Left Hand[src]

"I still have two lives left. Three, if you count my own— meaning I can die three more times. In order to stop me, you shall have to slay me. However, I’ll also be able to draw on whatever techniques you use to do so. The question is, will you live long enough to kill me three more times?"
―Lord Rocambole[src]

Destructive Capacity: Continent level+ Able to mimic any opponent powers and add them and their life force as his own. Fought toe to toe with General Gaskell and with little to no effort battled the strongest Invitees and slew them easily. 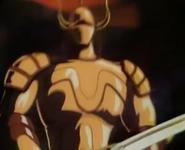