Start a Wiki
Raiser of Gales released in Japan as Rasier of Gales "D" (風立ちて"D") is the second book in the Vampire Hunter series.

"The first rule of vampires is that the undead cannot walk in the daylight... or can they?"

The people of the village of Tepes once cowered in fear beneath the shadow of the Nobility manor. But the Nobility moved on, and the castle sat empty, a place whispered of in ghost stories to caution the youth to stay far away. One day four of the village children vanished. Only three returned, with no memory of what happened or where they went.

That was ten years ago. Now, in the year 12,090 A.D., vampires who can walk in the daylight have appeared. Did the disappearance of the children have something to do with the undead's newfound powers? Only the vampire hunter known as D can solve the mystery... but the answer may be more horrible than any can imagine. 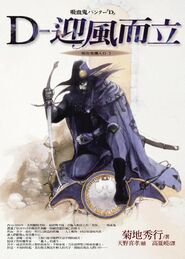 Retrieved from "https://vampirehunterd.fandom.com/wiki/Raiser_of_Gales?oldid=24850"
Community content is available under CC-BY-SA unless otherwise noted.