D goes to a thriving town where, in the past ages, mortals and the Nobility lived together peacefully. The 17-year-old beauty Sybille Schmitz has been sleeping there for 30 years since being bitten by a Noble, neither waking nor aging. It is dreams of her dancing in a ghostly chateau bathed in blue light that lure D there, where the entire town has already dreamt of this handsome dhampir.

There are a number of folks who feel that by awakening the sleeping woman, the Vampire Hunter will destroy their peaceful world, and they would gladly kill D to prevent that. After all, their village produces 20 times as much food as they need, and the exporting of that bounty has made them quite comfortable. And the murderous Bio Brothers, Harold and Duncan, are called in to see to the disposal of the cursed half-breed D. 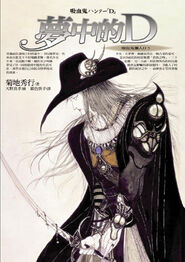 Retrieved from "https://vampirehunterd.fandom.com/wiki/The_Stuff_of_Dreams?oldid=24881"
Community content is available under CC-BY-SA unless otherwise noted.